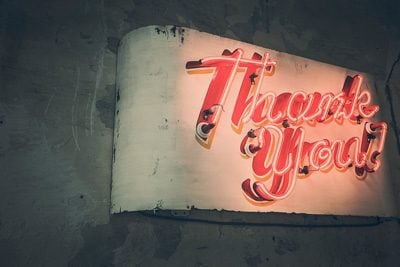 The Table has many names because it does many things. Of late, I have come to understand why one of those names—Eucharist—means “thanksgiving.”

Growing up “once born,” I was introduced at some point to “Communion” in church. But I was never sure with whom I was supposed to be communing. God was far off. His Son had died but a martyr’s death and had experienced a “resurrection,” as far as I could tell, only in his followers’ imaginations. Communion felt like rote religiosity to me.

After I became “born again,” I frequented “The Lord’s Supper” as a reenactment of the meal on the eve of our Lord’s death, and “The Lord’s Table,” as a sharing in the banquet of the world’s true King. But I was often confused because, for whatever reason, I got the feeling that this Lord was ready to give me an early death if I did not partake worthily. The Lord’s Supper often felt like a funeral, and his Table was scary and somber.

Robert Webber, champion of worship renewal, helped me better understand the point of the Bible’s and the ancient church’s worship practices. Long story, but he helped me find communion in Communion, redemptive remembrance in the Last Supper, and grace-kissed reverence in the Lord’s Table. He also noted that the most common way that the early Church spoke of the Table was as “Eucharist,” in view of Jesus’ “giving thanks” first over loaves and fishes (Mt 15:36; Jn 6:11, 23), and then over the Bread and the Cup (Lk 22:17; 1 Cor 11:24). When I was first invited to help distribute bread at a Eucharist (in which people came forward to receive, instead of remaining in their seats), I noticed how many people came with smiles on their faces. They seemed, well, grateful. Perhaps it shouldn’t have been, but cheerful gratitude at the Table was a new notion for me.

A sermon by Augustine, the great 5th century North African bishop, has helped me understand the smiles.

In his Sermon No. 272, “On the Eucharist,” Augustine celebrates who Christ is, what he has done, and where he is now as Ascended Lord. Then he takes up the question of how this bread and wine down here can connect us to who he is up there. He simply asserts: in these elements, “one thing is seen, while another is grasped.”

The Mystery of My Own Self

The elements on the Table physically represent Christ’s body in such a way that “what is grasped bears spiritual fruit.” Augustine reminds us that Paul has said: “You are the body of Christ, member for member” (1 Cor 12:27). Thus, continues Augustine,

To paraphrase, here at this Table you say “Yes!” to yourself, “Yes” to who you are in Christ, “Yes” to the people to whom he has made you to belong!

Augustine asks believers to compare themselves to the loaf on the Table.

Because of Christ, I am no longer alone. Because of Christ, I am no longer subject—to borrow the language of the Book of Common Prayer—to “Satan and all the forces of wickedness that rebel against God.” Christ has breathed life into me, so my life has “rise” or buoyancy to it. The Holy Spirit has warmed what was cold and desolate in me. At Eucharist, I receive back the mystery of who I am.

The Mystery of Our Unity

Of the bread, Augustine has said: “Understand and rejoice: unity, truth, faithfulness, love.” He asks us to ponder the cup:

Remember, friends, how wine is made. Individual grapes hang together in a bunch, but the juice from them all is mingled to become a single brew. This is the image chosen by Christ our Lord to show how, at his own table, the mystery of our unity and peace is solemnly consecrated.

Here, indeed, is why the early Church could—as can we!—bring smiles to the Table. For at a Table of Thanksgiving/Eucharist we, who through grace belong to Christ and to one another, may “give God our sincere and deepest gratitude, and, as far as human weakness will permit, … turn to the Lord with pure hearts.” The Eucharistic Table assures us together that:

God’s power will drive the Evil One from our acts and thoughts; it will deepen our faith, govern our minds, grant us holy thoughts, and lead us, finally, to share the divine happiness through God’s own son Jesus Christ. Amen!