[dropcap]I [/dropcap]was awakened early this morning by the sound of footsteps running through the dark.  I am the lighter sleeper between us so I expect that any footsteps that I hear will end at my side of the bed.  This morning was no exception.

My wife and I had recently commented that our four-year-old, had never come to get into bed with us.  All of our children have had seasons where they left the comfort of their own beds for ours because they were sick, scared, or just lonely and awake.  Staring into a dark room was never fun as a child so I have immediate compassion when I hear the sound of those hurried footsteps, often accompanied by the ever-increasing moan of a child’s voice.  It sounds like a small train racing through our house.

We had wise advice many years ago when asking more-seasoned parents if this was a good habit for children to get into.  At the time their children were all teenagers.  Their reminder has been our motto during what has become an all too fleeting season of parenthood: “it’s sweet and it doesn’t last forever; enjoy it.”  So we do, especially now that we have a king-size bed to accommodate.  With the number of children we have, there have been some overlapping seasons of “runners in the dark” where by morning our bed looked like we were running an inn in Bethlehem.  Those days of queen and full-size beds taught me the ninja-like skill of sleeping vertically on the side of the mattress with one arm on the floor and the other clinging to the headboard.

But our youngest child has had so many older siblings, who have become surrogate parents on the second floor that he had not come to us the way the other six had.  The journey to our bedroom is into the upstairs hall; down the steps toward the front door (with open window panes on either side that look toward a dark street); toward the back of the house where a remarkably creepy sliding glass door (with a broken seal that allows moisture between the panes, revealing a “fractured” view of the barely-lit backyard); through the dimly lit family room; into the rear addition toward a pitch dark room that is our bedroom (I often hear a pause at the doorway of our room, accompanied by heavy breathing, as small terrified eyes adjust to the pitched-black darkness that is our bedroom).  This morning marks the fourth time in a week that our smallest sprinter has made the “run through the dark.”

He has been very sick for the past week.  Pneumonia has brought upon him high fevers and a persistent cough accompanied by aches and pains.  He has also gotten old enough that some things “freak him out” now (his words).  The worst things often reside in his closet.  The last few trips to our room have been because of bad dreams and things that move in the dark.  I sometimes wonder how bad the dream must seem to a four-year-old in order to compel him to make that long run in the dark (right through the “moving things”) to get into bed with his parents.  I don’t have to wonder long when I see and hear him slip into that comfortable place between us.  The sound is as sweet as my dim perception of the sight.  After I lift him into bed while asking him what is wrong, I place him between us, as what had been a frantic run becomes peaceful sleep in seconds.  His eyes close; his breathing settles; his body goes limp; and sleep overcomes him like a gentle wave of peace.

And now I am wide-awake and the connotations are so strong to my worship-leading psyche that it triggers a reflex.  This is what worship should be!

When we know who is waiting for us at the end of the run, we can endure the run.  Fear is irrational and tends to paralyze.  Eyes fixed on darkness make peace nearly impossible.  Eyes fixed on a loving Father give strength and courage to run.  Worship gives us a tangible sense of the peace and rest that awaits us with Him that makes the journey bearable.  Life can be much like a run through the dark.  There are many points along the way that seem at best uncertain, and at worst, all too certain.  The Bible calls this journey a race.  The gospel of Jesus Christ has revealed the only way that leads to the Father’s rest.  In him and him alone, there is joy and peace at the end of the run!  Every week is a part of the race of life for the worshipers that gather in our services.  Every week is a reminder of who waits for us at the end of the long, arduous run.  Even more, every week is a reminder of the One who has gone before us, and now runs with us.

Worship reminds us of the prize!

…let us run the race with perseverance, fixing our eyes on Jesus… (Hebrews 12:1-2)

Scott Connell is a professor of music and worship at Boyce College/SBTS in Louisville, KY.  He has served the church for over twenty years as a worship pastor, church planter, and senior pastor.  He plans to graduate in May with his Ph.D. in Christian Worship.  He and his wife Mary have seven children. 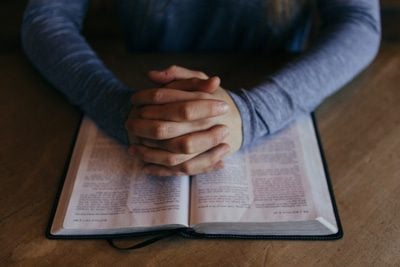