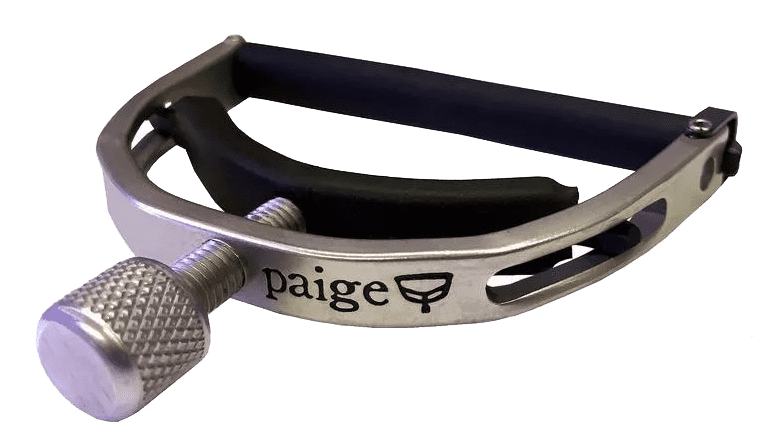 Capos are a metaphorical lifesaver for many guitar players, they allow you to play open chords in different keys and can keep you from having to play the often dreaded barre chords. However, most capos have a problem, they bend the strings. This unfortunate side effect causes the guitar to play out of tune. This is, of course, unless you place them perfectly behind the fret or take the time to re-tune your guitar after putting it on.

I’ve had the same capo for most of my adult life so I, like many people, had just learned to live with the consequences and became meticulous about my placement, would check my tuning, and had to avoid using them on an electric guitar and simply gave up trying to use one with lighter gauge strings. Thankfully there is a better way. Though it took some time, I began to notice that many musicians were not using the same capo I was and of all of the capo options out there in the world, the one that I started to see used fairly often was the Paige capo. A capo that has a simple but clever design that allows you to easily apply even and direct pressure to the strings so that your guitar stays in tune! Hallelujah.

There are a few ways to use this capo, the first being the most surprising as they are actually designed not to come off your guitar. That’s because the capo can be discreetly tucked behind the nut (the top fret by the headstock where the tuning pegs are) which allows you to always have your capo ready. You simply slide it to the fret you want and tighten it with a few twists. I found this to be a two-hand operation, but even with adding in an extra extremity it was still faster than my previous process. Though it is not the recommended method you can, of course, take the capo off, which only requires a slight squeeze on the side which releases the bar to swing open.

Several different models are available for different instruments and even for different neck shapes. They are readily available at most music stores or online retailers and are competitively priced.

Bottom Line: If you play guitar you should know about this.